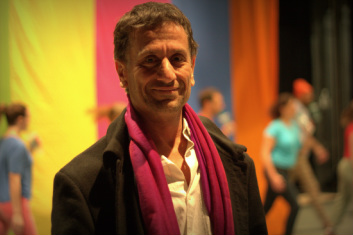 This project is supported by the 2022 GPS/Global Practice Sharing program of Movement
Research with funding from the Trust for Mutual Understanding.

Mark Haim has been choreographing for over 35 years. Artistic Director of Mark Haim & Dancers from 1984–1987, and the Companhia de Danca de Lisboa from 1987–1990, he is currently AD of Mark Haim Dance and Theater based in Seattle, WA. He has created new works for dance companies such as the Nederlands Dans Theater, Ballet Frankfurt, the Limon Dance Company, the Joffrey II Dancers, and the Rotterdamse Dansgroep, and has restaged his works on The Joffrey Ballet, the Bat-Dor Dance Companyof Israel, Djazzex, and the Juilliard Dance Ensemble. His full evening solo project, The Goldberg Variations, has been performed at the American Dance Festival, the Danspace Project at St. Mark’s Church, The John F. Kennedy Center, On The Boards and other venues in the U.S, Europe, Asia. His newest work, This Land Is Your Land, opened the ArtDanThe Festival in Paris, and has also been performed at the Joyce Theater in NYC and in the Nasher Museum of Art as part of the 2013 ADF performing series. Most recently, Mark has been choreographer for the Seattle Opera’s productions of The Consul and Tales of Hoffmann. Mark has been on the faculty of the American Dance Festival since 1993 and was the Senior Artist in Residence at the University of Washington Dance Program from 2002–2008. He has also taught at the NC School of the Arts, University of Illinois, Ohio University, SMU, VCU, Cornell, JMU, Reed College, Simon Fraser University, and for schools and companies in Belgium, Holland, Germany, Italy, Portugal, Poland, Latvia, Russia, Argentina, Chile and Japan. He is a recipient of a 1987 New York Foundation for the Arts Choreographers Fellowship, a 1988 and 1996 NEA Choreographers Fellowship, and grants from the NPN Suitcase Fund, ArtsLink, Inc. and the Seattle Office of Arts & Cultural Affairs. In 2000, he was awarded the Scripps/ADF Humphrey-Weidman-Limon Fellowship for Choreography. Mark is a Fulbright Senior Specialist. He holds a BFA degree from The Juilliard School and an MFA from Hollins University.